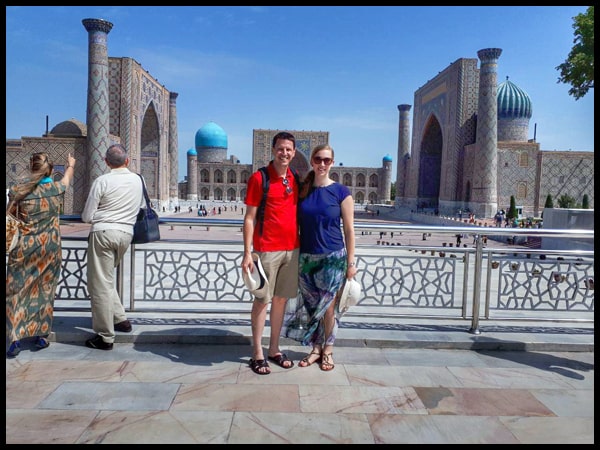 You will be conquered by the fact that all the places that you are going to see are bright and colorful. During the tour you will be able to fully enjoy not only the amazing monument of stories but also the beautiful nature of the country. You will have an opportunity to learn a lot about the people and the culture and traditions. This tour will help you enjoy a fabulous country.

Day 1: Tashkent - Samarkand
You will be met and transferred to Tashkent upon arrival to airport. In course of the tour you will be able to explore the significant sights of the city. At first you will observe the Independence Square dedicated to the victory over fascism during the World War II. After it you will have a chance to explore the local Broadway that separate the Independence Square and Amir Timur square. Then you will enjoy the view of one of the most beautiful metros in the world. The first line of which was opened in 1977.  After it you will travel in the o part of the city that is known due to such prominent sights as Chorsu Bazaar, Kukaldash Madrasah and Hast Imam complex including several madrasahs, mosques and mausoleum. The most awited sight of this tour is the world's oldest Quran copy found in the 8th century. Then you will be transferred to Samarkand by train. The night in the hotel.

Day 2: Samarkand - Bukhara
In course of the tour you will have an opportunity to learn about the city that is situated in the valley of the river Zerafshan as well as known to be the second largest city of Uzbekistan. Moreover it will be interesting to know that this city has similar age as the cities of Babylon or Rome. Then you will have an opportunity to observe the Registan square which is known due to the three impressive Madrasahs of the 15th and 17th centuries. Then is the Shakhi-Zindeh where it will be possible to see a huge variety of mausoleums of the 11th and 15th centuries as well as being the part of UNESCO Heritage Site. And then are two impressive sights known as Mausoleum Guri Emir and Bibi Khanum Mosque. The Bibi Kanum mosque is interesting due being built to Tamerlane's wife after his victory in India. In the evening we will drive to Bukhara by train. Today you will spend the night in the hotel.

Day 3: Bukhara
Toady you will enjoy the time here by having city tour. In course of this travel you will visit the most significant attractions of the city. Today's destination will be done by having the city tour. The first site to observe is known to be the oldest citadel in Uzbekistan which dating back to the 4th century, Citadel Ark. It was used as a palace for several dynasties of Bukhara Empire. Then you can witness the Samanids mausoleum of 9th and 10th centuries. Next sight to explore of such tours are Chashma Ayub or Job's well and Bolo-Hauz mosque known due to its forty columns made for Bukhara governor Abu-Fayud Khan. Then you can walk along the shopping domes as well as madrasahs of Bukhara named Nodir Divan Begi, which is also a part of the Lyabi House Ensemble. Then is the one of the most beautiful sight in Uzbkistan -Poi Kalon complex. Here you can enjoy the 12th and 16th centuries sights as Kalon minaret, Kalon mosque and Mir Arab Madrasah. No doubt you will like these interesting places in tours in Uzbekistan. Overnight will be spent in the hotel.

Day 4: Bukhara - Tashkent
Today you will have a tour to explore the near area of the Bukhara city. At first you will visit Bahauddin Naqshbandi complex that was made in honor of famous Sufi Leader and Philosopher which ones used to be the Muslim pilgrimage places for all Muslims. Moreover it can be noted that Sheikh Bakhauddin Nakshbandii was the spiritual master of Amir Timur. Then you will explore the complex which is consists of mosques Kushbegi and Muzafarohana, as well as yard with pool, madrasah and burial vault of Bukhara rulers and Dakhma upon the tomb of Saint Bakhauddin Nakshbandi. Then the road of the tour goes to scenery residence of Bukhara Emirs known as Sitorai Mohi Hosa complex which will impress you by having different architectural styles. This place was built in honor of Emir's wife who lost her life in young age that's why it called "Star - like and moon- like Palace". In course of your travel you will explore the famous Chor Bakr memorial complex also known as The Dead Tow). The complex shows that all people are equal.  This sight belong to Samanids reign time until the 16th century. We hope you will like your travels in Uzbekistan. Flight to Tashkent. The night will be spent in the hotel.

Day 5: Tashkent - Departure
Flight for the next destination.