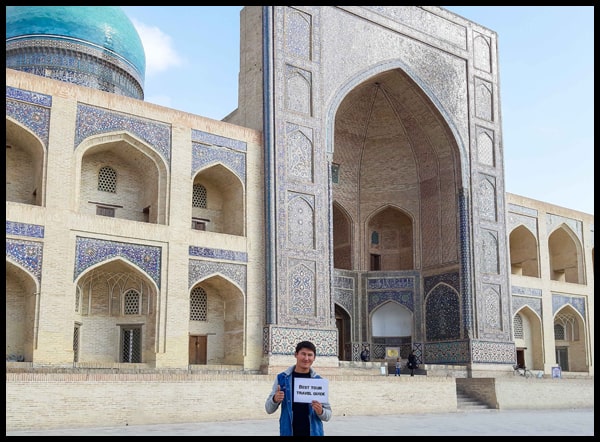 Uzbekistan is a country that can win the heart of any tourist with its bright colors. Here you will have many opportunities to see something that is so famous for the country. The ancient itory of monuments will impress you with the events that they happened to see. You will be able to find out everything while traveling with us on this tour with a variety of attractions.

Day 1: Tashkent
Upon arrival to Tashkent International Airport you will be met and transferred by the driver.in course of the tour you will be able to explore the most prominent sights of the city.  In such case the tour will start by visiting the Independence Square which is dedicated to the victory over fascism during the World War II. Then goes one of the most popular and visited place -Broadway, which divide the Independence Square and Amir Timur square. Don't miss the chance to visit one of the most beautiful metros in the word, which first line was opened in 1977. After it he tour will continue in the old part of the city where it can be possible to see Chorsu Bazaar, Kukaldash Madrasah and Hast Imam consisting of madrasahs, mosques and mausoleum. After that you will visit Othman Quran knowns as world's oldest Quran found in the 8th century. You will have the night in the hotel.

Day 2:  Tashkent - Samarkand
In course of the tour you will have a morning ride in train to reach Samarkand. You will find this city in the valley of the river Zerafshan that is also considered to be second largest city of Uzbekistan. And the history of which is not inferior to the cities of Babylon or Rome. Then you will explore following sites Registan square, Shakhi-Zindeh, Mausoleum Guri Emir and Bibi Khanum Mosque. The first sight called Registan Square that is consisting of three Madrasahs that dating to the 15th -17th centuries. We have no doubt you will be impressed by this heritage in your tours. Another one possesses a huge collection of mausoleums found in the 11th-15th centuries, also included in UNESCO World Heritage List - Shakhi-Zindeh. After it is  the one of the most beautiful buildings of the past the Bibi Khanum Mosque that was built for favorite Tamerlane's wife, after his visit in India. The night will be spent in the hotel.

Day 3: Samarkand
Today we will continue to explore Samarkand city. In course of the tour you will explore Ulughbek observatory of 15th century. He was one of the most important and famous Samarkand rulers and scientists. By using this observatory he created in 1437 the "Zidji Guragoni" catalog which included facts of 1018 celestial bodies. Unforutnately he was killed his son. Then you will have a chance to explore the local Broadway as well as visit souvenir shops, teahouses, sweets and workshops in the travel. And then it will be great to visit the National bazaar Siab (Oriental bazaar). Here you will have an opportunity to try Uzbek traditional handmade products and local sweets. Then you will be impressed by the  carpet handmade factory done by over 400 women. Overnight is in the hotel.

Day 4: Samarkand - Gijduvan - Bukhara
In the morning you will be transferred to Bukhara city. On the way to it you will have an opportunity to visit the Gijduvan village the private pottery workshop can be seen. This place is known among world. The secrets of making ceramic goods are passed through generations. Moreover now it is home for the sixth generation of potters from Narzullayevs family. We have no doubt you will be impressed by this place in tours in Uzbekistan. Here they use a geometric pattern colored in green and blue colors. After it you will explore the memorial complex of Al Bukhary.This place is famouf for not only by the beautiful façade but also by Islamic scholar, who made the hadith collection known as Sahih al-Bukhari, observed by Sunni Muslims.  Upon arrival in Bukhara city you will spend the night in the hotel.

Day 5: Bukhara
In course of the tour you will explore the greatest sights of the city such as ancient Citadel Ark of 4th century. It served for several dynasties of Bukhara Empire. Then is Samanids mausoleum of to the 9th and 10th century. Don't miss the chance to take a lot of photos in the tour. Next destinations of the tour are Chashma Ayub or Job's well and Bolo-Hauz mosque, which are known due to the forty columns. That was made to Bukhara governor Abu-Fayud Khan.  After it you can explore the shops as well as madrasahs of Bukhara - Nodir Divan Begi, which belongs to Lyabi House Ensemble. Then you will be impressed by the Poi Kalon complex that will amaze you by its incredible façade as well as its three structures which were built in the 12th and 16th centuries as Kalon minaret, Kalon mosque and Mir Arab Madrasah. Overnight will be spent in the hotel.

Day 6: Bukhara
In course your travel you will visit the sites that lays near Bukhara. You will start with exploring Bahauddin Naqshbandi complex. Here you will place that will build in honor of famous Sufi Leader and Philosopher where Muslim people used to pilgrimage. This person was Sheikh Bakhauddin Nakshbandi, it is one of spiritual master of Amir Timur. In mosque it will be possible to witness mosques of Kushbegi and Muzafarohana placed with courtyard with pool, madrasah, and burial vault of Bukhara rulers. Moreover you will see the Dakhma on the top of Saint Bakhauddin Nakshbandi.  Next destination of the tour is the castle of Bukhara Emirs called Sitorai Mohi Hosa complex that mesmerize tourists by its architectural styles. This palace was named in honor of Emir's wife who died young the name of which known as "Star - like and moon- like Palace". Then you will be transferred to Sumiton village and get amaze of Chor Bakr memorial complex or Dead Town which was built during Samanids dynasty in16th century. This night will be spent in the hotel.

Day 7: Bukhara - Khiva
Today your destination of the tour is Khiva. This city is known due to possessing more than 140 architectural monuments of the Middle Ages. The whole city is consist of green avenues, parks, avenues and other outstanding streets. The road to Khiva to Bukhara goes through the famous Kizilkum desert. During the drive you will be able to enjoy the view of Amu Darya river that is the deepest river in Central Asia which is formed by the convergence of the Panj and Vakhsh in Tajikistan. It flows into Aral Sea. Upon arrival you will have a break in Khiva. Night is in the hotel.

Day 8: Khiva - Urgench  - Tashkent
The day will start with having the city tour in Khiva.  Here you will be able to find the best sights of eat history in Uzbekistan. You will explore the sight that called Ichan-Qala that is considered to be as the inner city in Khiva is made up by hardened walls. Here you will be impressed by the old sound buildings, palaces, mosques, Madrasahs, Mausoleums, Minarets, Caravan-Sarais and Bathhouses which is shaped Ichan-Qala into unique city-monument. This sight possesses over 400 traditional dwelling houses as well as 60 architectural monuments. It should be noted that in 1969 Ichan-Qala was built a historical and architectural conservation area. The most outstanding sites are the Kunya-Ark fortress of 17th century was found by Muhammad Arang Khan, the Kalta Minor minaret as well as the Tash Khouvli palace. These sights are known as the unique masterpiece of 1830s. In the evening you will have the flight to Tashkent. Overnight will be spent in the hotel.

Day 9: Tashkent - Flight
Breakfast will be in the hotel and then transfer to the airport for the next destination.